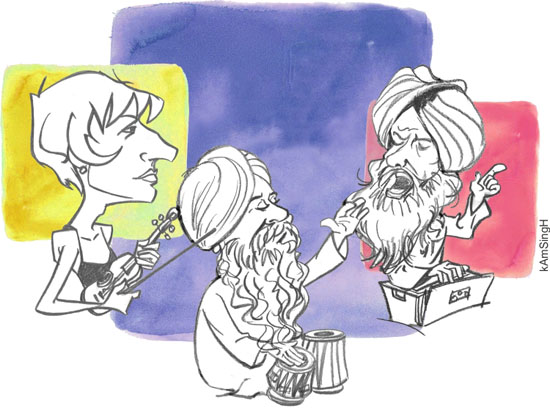 Water flows as time flies,
memory is retained
until the waters evaporate.
Vapour carries the indelible
the stains
of a tear that once flowed
a smile once adorned
a thought realized.
Shattered innumerous times
a soil soiled by the greedy.
Yet, affords a response with
a melancholy note
a gay like beat
and
even a revelation,
a phulkari.

Even though the five rivers of Punjab evoke different and at times contradictory emotions, they constitute for me, as for many others, the image through which I imagine my cultural location in the cosmos. They seem to embody a sense of the mysterious as when we look at their ever-gurgling energy with awe and wonderment. The texts extolling this aspect of the rivers Sutlej and Beas are found in the Rig Vedas. The former also has rich religious connotations especially for the Sikh community as we try to map the rise of the Khalsa. On a mystical level, Guru Nanak's epiphanic self-realization has a definitive, almost umbilical, link to the river Bein. The river Chenab is forever etched in our cultural memory as an impassioned and possibly even as a dark metaphor for most of our love legends from Heer-Ranjha to Sohini-Mahiwal. Once in a while, these rivers also function as the almost supremely indifferent agency of nature - destructive and brutal in their unfathomed raw energy. The rivers also link us up to the very idea of the other in a sort of a cultural, topography elan. We become ever so spontaneously tied up with the so many imagined others - Greece, Tibet, China, Sind, Samarkand....

Founded in the 5th century and spread over 118 small islands formed by 177 canals in a shallow lagoon, Venice is an extraordinary architectural masterpiece in which even the smallest building contains works by some of the world's greatest artists. Somehow, the water preserved it.
The waters of the lagoon are calm and quiet. In them you will not see reflected the restless rhythm of our times. Walking in the narrow streets, among the canals, steps' noise or people's voices and the waves' sound is what you hear. The water, reflecting the sky, multiplies the melancholy of a foggy autumn day, while in spring the sun will shine on the lagoon with a very shimmering light. Sometimes, with the tide, the waters will rise and cover the whole San Marco square, magically hiding the paths and mirroring the sky, as if the city were hanging mid-air.
Venice has played an important role in the development of the Western classical music: the Venetian state - i.e. the medieval Maritime Republic of Venice - was popularly called the "Republic of Music", and an anonymous Frenchman of the 1600's is said to have remarked that "In every home, someone is playing a musical instrument or singing. There is music everywhere."
During the 16th century, Venice became one of the most important musical centers of Europe, marked by a characteristic style of composition (the Venetian school) and the development of the Venetian poly-choral style. By the end of the century, Venice was famous for the splendor of its music, as exemplified in the "colossal style" of Andrea and Giovanni Gabrieli, which used multiple choruses and instrumental groups. Venice was also the home of many famous composers during the baroque period, such as Antonio Vivaldi and Tomaso Albinoni, and women too had an important place in the musical landscape of that time: in the Ospedale della Pietà orphans and noble girls were superbly performing and composing music.
I believe that the slow flowing of the water and the tides played an essential role in the rhythm and the creation of those wonderful music masterpieces.